WE'RE HEADING BACK TO VEGAS! 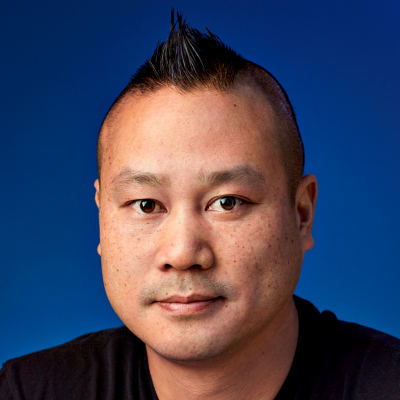 In 1999, at the age of 24, Tony Hsieh (pronounced Shay) sold LinkExchange, the company he co-founded, to Microsoft for $265 million. He then joined Zappos as an advisor and investor, and eventually became CEO, where he helped Zappos grow from almost no sales in 1999 to the multi-billion dollar company it is today. Back in 2009, the company was acquired by Amazon in a deal valued at $1.2 billion on the day of closing. Tony has remained as CEO of Zappos, which operates independently of Amazon, and continues to help build Zappos as a company dedicated to customer service, company culture, and community.

Tony’s book, "Delivering Happiness", was published in 2010, and outlines his path from starting a worm farm to life at Zappos. Tony shows how a very different kind of corporate culture is a powerful model for achieving success and happiness. “Delivering Happiness”, debuted at #1 on the New York Times Bestseller list.

In addition to his responsibilities as CEO of Zappos.com, Tony helped start Downtown Project (www.downtownproject.com), a group committed to helping transform downtown Las Vegas into the most community-focused large city in the world. This transformation includes the relocation of the Zappos offices from Henderson, Nevada to what was the old City Hall in downtown Las Vegas.

Tony currently lives in an Airstream on half a city block right in the middle of downtown Vegas, with his dog Blizzy and two pet alpacas who enjoy hanging out by the campfires every night.

Why Tony?
Tony is lauded as one of the pioneers of the "Wow" experience, leveraging customer experience as the differentiator to grow Zappos to the organization it is today.  Tony spoke at CCW Vegas back in 2016, and for the 20th anniversary, we wanted to bring him back to the CCW main stage as a fan favorite speaker.  Tony's presentation focuses both on Zappos' ability to deliver happiness as well as is work with the Las Vegas Downtown Project.

Check out the incredible speaker line-up to see who will be joining Tony.