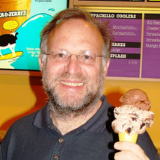 Jerry Greenfield was born in Brooklyn, New York, four days before his future business partner Ben Cohen. He grew up and went to school in Merrick, Long Island. It was there that he first met Ben in junior high school, and the two have remained close friends ever since. Greenfield graduated from high school with a National Merit Scholarship under his belt and enrolled at Oberlin College to study pre-med.

At Oberlin, Greenfield got his first taste of the ice cream industry when he took a job as a scooper in the college cafeteria. After graduation, he worked as a lab technician in New York and lived with his school buddy Ben in an apartment on East 10th Street. In 1977, with Jerry thoroughly sick of his occupation as lab tech, the two friends joined together in an unlikely venture: running a food business together. The two eventually settled on ice cream, and, after a bit of research (and a $5 Penn State correspondence course in ice cream making), opened Ben & Jerry’s Homemade ice cream parlor in Burlington, Vermont in May 1978.

Ben and Jerry soon became known throughout Vermont for their rich, unusual flavors and community-oriented approach to business. They sponsored a Fall Down Festival and a free outdoor movie festival, and celebrated their anniversaries with a Free Cone Day. Jerry began by making all the ice cream, but as

the company expanded into new markets, he soon found himself handling everything from distribution to orientation to employee motivation.

Today a model for American business success, Greenfield and Cohen have been recognized for fostering their company’s commitment to social responsibility by the Council on Economic Priorities (which awarded them the Corporate Giving Award in 1988 for donating 7.5 percent of their pre-tax profits to non-profit organizations through the Ben & Jerry’s Foundation), and by the U.S. Small Business Administration (which named them U.S. Small Business Persons of the Year in 1988 in a White House ceremony hosted by President Reagan)

Why Jerry?
Jerry will close our conference with his closing keynote. He will deliver an inspiring tribute to America’s entrepreneurial spirit, full of anecdotes and radical business philosophies. He will address how to build and drive a mission-driven brand that drive intense customer and employee loyalty.

To dig a little deeper, Jerry will discuss the promise and importance of “values-led” business to drive loyalty, how to harness the power of social responsibility and creative management to build an empire, the importance of a fun and community-oriented approach to business and surviving amongst fierce competition.

Join Jerry after the conclusion of his keynote for some Ben & Jerry’s ice cream!