Finding connections between the enduring, immensely astute "Seinfeld" and the world of customer service is never difficult. A look at the first four seasons, after all, produced five articles of lessons for customer management professionals.

Do not tell my boss, but the job of connecting "Seinfeld" situations to the customer service can even be exceedingly easy.

Insofar as "Seinfeld" tackled the myriad of situations real individuals really encounter in their real lives, it had no choice but to dedicate focus to tales of customer experiences gone wrong. Recognizable, relatable and maddening, the stories are as relevant to customer service professionals as they are humorous to viewers of several generations.

Season five—which is widely recognized as the second of the series’ golden years—presents several customer experience horror stories. From those stories, we arrive at lessons that can empower your business to create better, more magical, more valuable customer service moments.

Much like the to-be-introduced "Soup Nazi," fruit stand owner Joe does not subscribe to the notion that the customer is always right. Because it is his fruit stand, he believes he represents the most important (and, in fact, only relevant) voice in the customer experience journey. Engagements with Joe are not back-and-forth endeavors; they operate in accordance with his rules, or they do not happen at all.

Confident in this philosophy, Joe even posts a sign declaring that the experience hinges on customer demeanor.

Upset by the quality of a peach he bought from Joe’s stand, Kramer attempts to return the "used fruit" to Joe’s stand. "I want restitution," declares the show’s resident "hipster doofus."

Joe refuses. Despite claiming he "stands behind [his] fruit," the business owner quickly divorces himself from the situation. "You got a bad peach? That's an act of God," exclaims Joe. "He makes the peaches. I don't make the peaches; I sell the peaches. You have a problem? You talk to him."

Upset by the answer, the fruit-loving Kramer, who had advocated on behalf of the store in a previous episode, complains that the store is going downhill. Joe responds by banning the loyal patron from the store. Upon catching Jerry attempting to buy fruit on Kramer’s behalf, he also declares the titular character a persona non grata.

When it comes to customer management, it might instinctively seem that Joe was in the wrong and thus in need of a "lesson."

As a customer-facing professional, his job is to satisfy his customers. His customer service approach must serve the interests of customers, and his customer experience must be designed to create the greatest possible value for those customers.

Joe, it would appear, instead opts to serve himself. If a customer does not meet his personal ideal, he can modify or refuse service. If a customer has an issue, he sees no obligation to resolve it (that God "makes the peaches" is irrelevant, because Kramer is his customer rather than God’s customer). And if a customer offers feedback, his approach is to offer a permanently deaf ear.

Joe, seemingly, did everything wrong. The situation is not, however, so simple.

Upon being told the business accepts no accountability for its products and has no interest in his feedback, Kramer’s response was not to take his business elsewhere. It was not to cease advocating on behalf of the store, let alone start speaking negatively of Joe’s fruit stand. Instead, his greatest concern was determining what he would do for fruit without access to Joe’s store. He even attempted to circumvent the ban to continue buying from Joe’s store.

Developing that caliber of customer loyalty should be the goal of all businesses. Businesses should aspire to establish the rapport Joe has with his customers.

No, businesses should not precisely mirror Joe’s customer experience design. They should treat customers equally and fairly. They should accept accountability for their products and experiences. They should value customer feedback.

But the reason they should do those things is not because they are fundamentally nice and philosophically customer-centric; they should do them because, in most cases, they will foster customer loyalty.

Only the customer can define "the right thing" in the customer experience. In this case, what mattered most was offering quality fruit. Find out what matters most to your customers and devote as much effort as you possibly can to that realm of the experience.

Seinfeld Episode: "The Glasses"
Customer management lesson: Keep your promises—and your commitment to the customer.

Ever the finagler—and ever the social butterfly—Kramer routinely turns his connections into sources of advantage. He effectively lives off Jerry’s groceries. He finds ways to function without a wallet when out with friends. He works a contact to receive access to concert and event tickets. He leverages a connection to score Jerry a 30% discount on an air conditioner. He leverages a different connection to score his friends 30% discounts at an eyeglass shop.

Or so he thought.

Because Kramer helped his friend Dwayne kick his addiction to sugary snacks, Dwayne, the store owner, apparently offered to extend a 30% discount to any of Kramer’s other friends.

In need of glasses and not one to turn down a hot deal, George’s eyes light up when he learns of the discount. He goes to the store.

No discount is provided. Perplexed as to why George is touting his connection to Kramer, Dwayne assures everyone’s favorite short, stocky, bald man that he must pay full price.

The news enrages Kramer, who arrives to unleash a guilt-tripping fury on Dwayne. After attempting to weasel out of the promise, the store owner eventually agrees to extend it to George. He does, however, insist that "this squares us."

When it comes to customer management, keeping promises is essential. Aligning with the customer is even more so.

In an impossibly short time period, the loyal, accommodating, customer-centric Dwayne who won Kramer’s support and advocacy turned into a source of his rage and frustration.

Worse, it is unclear why Dwayne would have expected anything different. Even if he felt Kramer was overstating the promise, he clearly acknowledge his debt and clearly knew that his new business was a direct result of the presumed repayment.

To say no—all for the sake of scoring a few extra bucks from George’s transaction—would destroy the relationship he had with Kramer. In offering a sign that he neither intended to keep his word nor valued Kramer’s loyalty, patronage and advocacy, Dwayne effectively told Kramer to find another store to support and promote. And in refusing to provide George with the expected discount, he did nothing to win the new customer’s long-term business or advocacy.

Like the rest of New York, Jerry and Elaine find themselves addicted to a frozen yogurt shop that produces a stunningly delicious—yet surprisingly non-fat—product.

Concerns emerge, however, when the duo realizes it has gained considerable weight since it began consuming the yogurt. Both the manager and his wife maintain that there is no fat in the yogurt, but Jerry and Elaine cannot shake the notion that they have been bamboozled.

In need of a definitive answer, Jerry and Elaine submit a cup of yogurt to a lab operated by the FDA. Despite Kramer’s (an investor in the yogurt chain and a firm believer in its absence of fat) courtship of the lab technician, the test result comes up positive for fat.

The result ends up being communicated to the mayoral campaign of Rudy Giuliani (who acknowledged his passion for the yogurt when an errant blood test revealed he had high cholesterol) and, ultimately, to the world. The shop was forced to switch to a legitimately non-fat—and considerably less delicious—yogurt, which we effectively spelled its demise.

("Seinfeld" would later mock the nutritionally inaccurate premise by explaining that sugar calories can also produce weight gain, but the customer service relevance of the episode still applies)

When it comes to customer management, the customer—particularly one with an ax to grind—possesses considerable power.

Because its product was so enjoyable, the yogurt shop was able to escape outrage over its falsified claims. That changed, however, when a single duo of customers developed skepticism.

That skepticism (not even outrage) escalated beyond the duo’s conversational radius, and it produced viral condemnation of the business.

Today’s world—one in which customers are conditioned to demand more from businesses and in which they have social media in which to share their gripes—increases the viral potential of customer complaints. Any minor thought about a business can reach a global audience, and that makes the idea of keeping every single customer satisfied, happy and committed to the brand an absolute priority.

Sentiment resulting from bad experiences has, historically, never stayed inside the affected customer. In today’s world, the sentiment is not simply likely to expand – it is likely to explode. 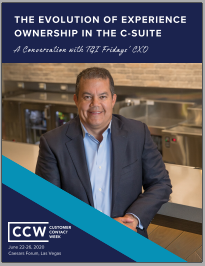