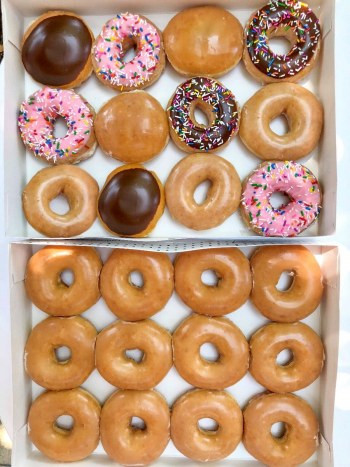 I recently had the opportunity to interview the 21-year-old accounting student, entrepreneur, and star of the viral Krispy Kreme story, Jayson Gonzalez. Within the past two weeks, Gonzalez’s story has been featured in Fox News, CBS News, CNN Business, Business Insider, Forbes, Yahoo Finance, and just about any other major business medium or news source you can think of.

“Why don’t I see if anyone else from Minnesota would want me to bring back some Krispy Kremes?”

Like many stories ranging from million dollar customer satisfaction ideas to generic Ponzi schemes, this one begins with a college student trying to pay off student loans.

When I asked Jayson to tell me how he got the idea of using a doughnut franchise to pay off his college debt, he started talking about the youth girls soccer team he was coaching. “I was coaching soccer last April. And we have a tournament down in Iowa. My girlfriend at the time, she never had Krispy Kreme.”

He started to get lost in reflection, stating how he grew up on the Krispy Kreme brand 11 years ago, the last time the franchise had a store in his state. It was immediately apparent that he had a sentimental and emotional attachment to the franchise.

“‘Why don’t I see if anyone else from Minnesota would want me to bring back some Krispy Kremes?’” he remembered pondering. “So I made a post. And sure enough, the next day, I had about 300 replies.

“I figured I would sell it on Facebook Marketplace… I think it had 27,000 views.” He set up a Facebook page titled “Krispy Kreme Run Minnesota” and “the rest was history,” so he thought.

The Metropolitan State University senior with a concentration in Accounting started getting up around 2 in the morning every weekend, driving 270 miles from Minnesota to a Krispy Kreme store in Clive, Iowa, packing his car with up to 100 boxes with 12 doughnuts each, and then driving back up north to deliver them to customers in Minneapolis-St. Paul.

Not simply popular with his customers, Gonzalez’s endeavor attracted favorable media and social attention. Krispy Kreme did not, however, rank as one of the initial supporters.

Despite his excessive purchases, the store in Iowa from which he bought the doughnuts did not provide a bulk discount. He later received a phone call from the brand’s Nebraska office, telling him to stop because he was creating a sales liability for the North Carolina-based company.

He responded with professionalism and emotional intelligence that rallied the media  in his favor. He showed genuine character, gratitude to his customers, and networking skills that turned into a PR masterpiece. 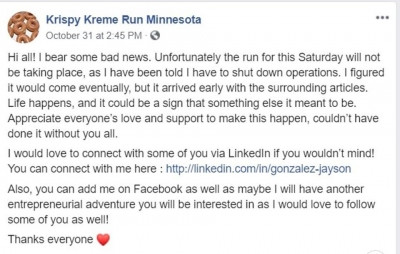 What was an inspirational story of a college student’s hustle and savviness turned ugly fast. TV stations, newspapers, radio stations and digital news operations jumped on it. The theme was, “Big business squashes young entrepreneur.” Hashtags to boycott Krispy Kreme started to trend on social media.

Krispy Kreme immediately recognized the negative brand impact — and remedied the situation. It reversed its ban on his practice and actually took him on as an independent reseller. Amid all the buzz, he was also gifted a Daimler delivery van to help restart his business in a big way.

Gonzalez plans to return to his independently operated business within a month, where he’ll continue to make the 8 hour round trip, stopping at Target parking lots throughout the drive back to Minnesota.

I asked him if he plans to make any changes to his business strategy now that he has a new delivery van and national marketing publicity. While licensing and inspections can be complicated with hiring employees or additional drivers from the franchise’s perspective, he’s anticipating more orders, more marketing opportunities, and more delivery room and space for inventory, allowing him to experiment with a lower pricing model.

“If I get more orders, I’ll probably be able to lower the prices. I’ve already experimented with the pricing. I started off with 12 dollars, then I increased it to 15, and then I increased it to 17 based on the demand [given the location he’s selling in], what people are willing to pay for it. It averages about 8 bucks profit each box. I think with more orders, I’ll be able to lower the price. As of right now I’ll be able to leave the business model the same. I might tweak a few things [in the future] and see what I can do differently.”

Personalized business strategies and savvy customer service are in Gonzalez’s blood. Jayson and I started talking about the importance of individualizing target marketing and capitalizing on experience-centric services. “Customer service is everything. My grandparents used to run a concession business throughout Minnesota… I quickly learned working for them that customers remember those moments.”

Gonzalez’s entrepreneurial savviness in this customer success story can be credited to a few identifiable decisions that he made. First and foremost, he understood his personal love for a brand’s product and recognized that the consumer need existed in Minnesota, a state that hadn’t had the product in 11 years. He then realized that he had the time and resources to place the orders at a Krispy Kreme in Iowa, make the 8 hour round trip drive to buy them on weekends, experiment with the resell pricing strategy to find the most profitable solution, and put himself in Minnesota parking lots with optimal foot traffic and visibility.

He then created social media marketing campaign that served as a digital garage sale, “Krispy Kreme Run Minnesota,” on Facebook Marketplace.  66% of Facebook users interact with their accounts on a daily basis, 800 million of which use the marketplace every month.

Through the marketplace, Gonzalez immediately gained publicity (27,000 public views) on a platform that allowed him to personalize private interactions through Facebook messenger. Lastly, once Krispy Kreme confronted him (as he knew they would, given his growing publicity and presented “liability”), he responded professionally showing emotional intelligence, genuine gratitude to his customers, and a publicly savvy networking message that helped him gain support from media enterprises. After his reaction gained national attention and viral hashtags began to surface in support of Gonzalez, Krispy Kreme had no choice but to reverse their initial PR mistake and partner with the 21-year-old entrepreneur.